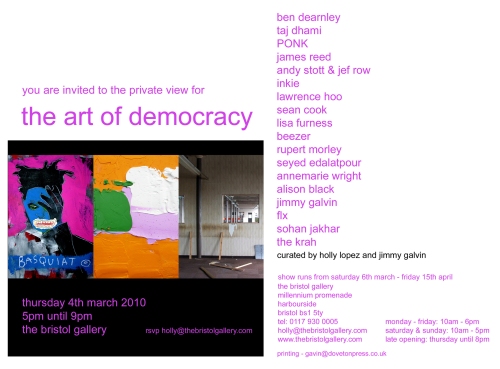 So, it’s been a while since this blog covered up coming shows, but here’s one definitely worth checking out.

It’s down at ‘The Bristol Gallery‘, which is a newish place down by Millennium Square in the centre, here’s a map of sorts. The website seems pretty unintelligible, something to do with ‘real art’ or something…

One of the myriad ways with which one might begin to get a handle on what are difficult and challenging works of art is to think about some of the pre-histories of art-making that have brought us to the condition of contemporary art as it is practiced today.

…and that’s just the homepage.

Still though, there are some top people with work down there at a show opening this Thursday (4th March), including Sir Felix of Braun, Baron Inkie, Lord Ponk and the deadly combo of Andy Stott (D*Frost) and Jeffrow. Beezer and The Krah have got work in it too, which is very far indeed from being a bad thing.

So, filter through the pretentious art toss and get yourself down there for a beer (or maybe some snakebite, served ironically of course) and a look at some work by some proper talent. You know the score.

Hope you’ve not got too much planned for the 11th of December, as there’s a lot on that night, here and abroad.

One you really shouldn’t miss though is the Friend and Co Christmas show, with another top line up and a good mix of people from Bristol and further afield. Namely, for those with screen readers;

Put all that lot together with the usual Friend and Co hospitality and fun crowd, and you’ve got something well worth a wander along to.In fact, you could do a crawl from the Beezer show, through Friend and Co and on to Weapon of Choice all on the same evening, with barely a hill encountered.

Alternatively, if you can’t make it on the night, it’s on til Christmas eve, so plenty of time to accidentally wander past it whilst the Mrs is trying to make you go Christmas shopping.

More on this soon, but just a quick heads up. Just in case there’s not already enough going on on the 11th December, there’s a launch of a new book at the City Museum up by the Triangle.

It’s by Beezer, who was around the Bristol scene in the 1980’s, and had the good sense to take photos of everything whilst he was at it. Saw an annotated copy of the book a few weeks back, and it really is well done, tons of photos from around Bristol, Wild Bunch parties, St Pauls Carnival and even Glastonbury Festival.

The launch at the museum should be interesting, there’s a book signing, a showing of a specially commissioned film about the scene by Steve Haley. Looks like the museum’s started spending the money it said it was going to on ‘graffiti art’ a short while back, as two big new commissioned works by Inkie and Ian Dark are going to be on display too.

Being the museum, it’s an RSVP sort of affair, so email linda.bryant AT bristol.gov.uk by Wednesday the 9th to go along.

One of the things to look forward to this time of year, is small short run group shows and galleries popping up to bring a bit of festive cheer and make christmas shopping that little bit easier.

The one with the biggest line-up announced so far is coming up in a couple of weeks and being put together by the indomitable Inkie.

For those with screen readers, it’s running in Mayfair for a short time only, 8th to 12th of December, and the line up includes;

A biggy then, if you fancy getting in for the private view, email exhibition@flying-eyeball.co.uk

There are a good few other shows coming up over the next month too here in Bristol, more on that soon…

As ever, this isn’t Inkie’s only thing coming up by a long way, here’s the man’s public calendar for the next few months…

Get Dring Mobile – The Photos

Top night down at Paintworks last night for the Get Dring Mobile auction, some great live painting outside, great music and a whole lot of bidding for a great guy. Well, bidding for art to raise money for a great guy, Mike himself of course not being for sale.

It was interesting to see how the bidding went. Some pieces were an absolute steal, other went for far more than you would ever have thought. As a wise man put it last night, ‘a picture’s only worth what someone is willing to pay for it’. Stencil work still seems to be very much in fashion with the buyerati, wonder how much longer that will last.

In total, the auction raised something like £24,500, before you count in the bar receipts, pieces that sold outside of the auction and all sorts. So well on the way to getting Mike’s car sorted then, awesome stuff.

There’s more to come still too, lots of pieces left to be sold on Ebay very soon, including a lovely Will Barras that lots of people were coveting last night, so keep an eye out.

Here’s some photos from it all then, the live painting as it went along, and the works inside the auction as well.

Dicy up behind the bar

FLX up high, above Pure Evil

With some of the postcards all framed up

The ‘artier’ side of things downstairs

Some of the £50 work upstairs

That statue totally had a nob

The Dora that started a bidding war, top left

Xenz on its own stand

Sepr, decks and so on

Eelus removing another layer of stencil

Lokey on the background

Boswell and Vermin further on

View from up high

Eelus masking off another triangle

Xenz with the can control

Mr Jago starting out with a roller

Boswell and Vermin a bit further along

Milk and Dora painting together

For those who don’t know about it, there’s background on the Get Dring Mobile auction coming up here. But for those who do, more details are now out about what’s going to be going on in a couple of weeks time. Here’s the chat…

The doors will be open from 11am to 9pm on Wednesday for a full days viewing of the works going under the hammer. Thursday will be a busy day with the opportunity for further viewing from 12pm.

There will be live painting by Mr Jago, Inkie, Lokey, Felix, Eelus, Xenz, Paris, Boswell, Vermin, Milk and Dora starting at 4pm and the auction including lots by Guy Denning, Pam Glew, Rowdy, Ian Francis and Nick Walker to name but a few, will commence at 7pm.

The work can be viewed on line at Dreweatts, www.dnfa.com and at www.art-el.co.uk. Bidding can be made in person or live online at http://www.the-saleroom.com on the evening, commission bids will be taken with valid credit/debit card details prior to the event. If you wish to make a commission bid and to register for bidding please contact The GDM team on 07789 971273 or e-mail getdringmobile@live.co.uk.

The event will also include a fine art ‘mystery’ postcard sale featuring work from award winning artists from all over the world, many of which have shown in the BP portrait awards and with some having work in the National Portrait Gallery their work usually thousands. This sale therefore gives people the opportunity to purchase a piece of art that would usually cost a small fortune, for just £50.

We are also running a raffle to win a portrait painted by Vincent Brown, a multi award winning portrait and figurative artist from Bristol. Tickets will be available at the event and are also available now via the GDM blog at http://getdringmobile.wordpress.com. For more information about Vincent Brown and to see examples of his amazing work please visit his web-site at http://www.vincentbrown.co.uk.

Vince himself will be attending the event and will determine the winner of our very own portrait competition. We hope to see lots of you there, with live painting, music, beer and curry this promises to be a great night.

Thanks to Inkie for sending these in, a round up of snaps of his work over the last couple of months, Movida, Ibiza, China White, Brick Lane and Bethnal Green.  As the song goes, ‘nice work if you can get it, and you can get it if you try’.

Inkie and Jade Jagger in Movida

That’s not the end of it by a long way though, he’s off around the world over the coming months for painting in various places. Here’s the current line up, with some Bristol antics in there too, most notably the excellent ‘Get Dring Mobile‘ event at Paintworks in October (which there’s absolutely no excuse for not going to), and a solo show at Friend and Co in November!

He’s doing the Secret Wars 5th Anniversary tonight in London too if you’re around, give it a google.

Bristol graffiti
Create a free website or blog at WordPress.com.