Slightly longer pause than expected that, but have been digging in the crates for some stuff that seemed lost for a good while. Lots of interesting old bits to bring in the New Year then, including the flyer from Banksy’s show at Eat The Beat in late 2000, and what could well be the first Banksy interview ever published, from before the Severnshed show. Lots of old photos from the late 90’s have turned up too, and should be on here soon enough.

Anyway, here’s a couple of bits of interest from back in the day, Glastonbury Festival 2000 if memory serves.

First this Souls On Fire wall, which was where the Glade area is now, in fact they still have boards in pretty much this position to this day. 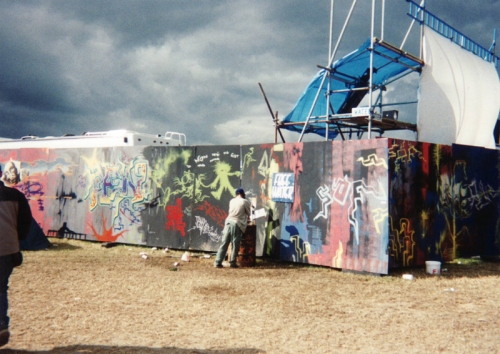 Also, this was Banksy’s contribution to his usual spot on the fence at the top of the sacred space/stone circle field back in 2000. Who said he never just tagged his name?

Christmas never mixes well with keeping up a blog, but normal service back in a day or two.

In the meantime, what the hell are you doing on the web anyway? Step away from the computer and go and have fun!

More people leaving stuff round for others to find at the moment too, had these snaps sent in the other day, looks like 24 free pieces have just (or recently) been left round Bristol to spread Christmas cheer and good will and the like. Left in places like North Street in Bedminster, Cumberland Road, Feeder Road, St. James Barton, Albert Road and other places around the city center, part of a European happy xmas tour from st8ment. 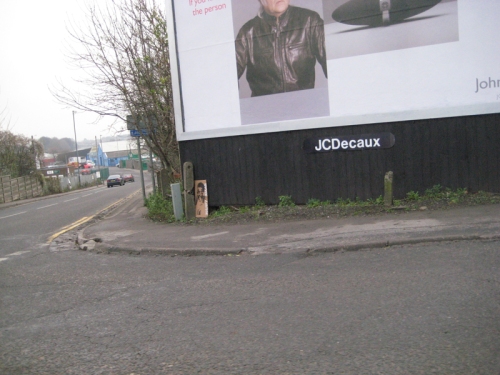 Not the clearest shots, but here’s a bash at a closeup on one of the pieces 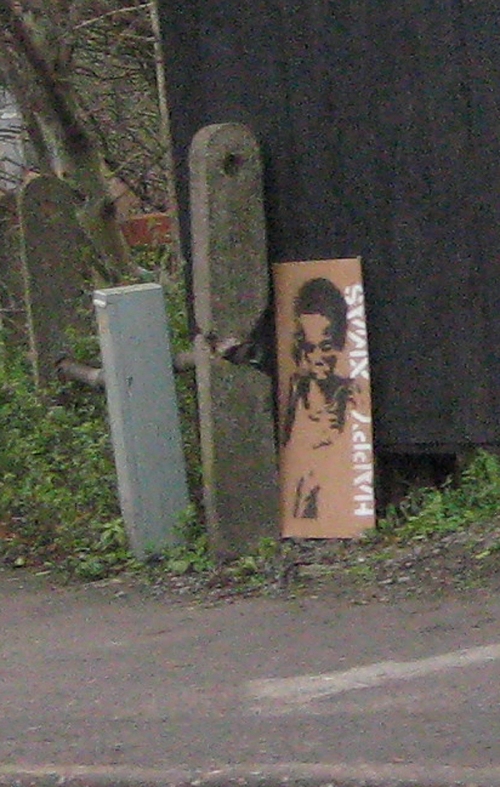 New st8ment blog coming in the new year too apparently, keep an eye out!

It’s been ages since Jeffrow was out and about, but now he’s back with a little project. Always a fan of kitchen white goods, Jeffrow’s plan is to go round Bristol finding dumped fridges and asking the owner if they fancy having a piece done on the front of them. There are 4 images, which will be done in limited amounts over the next while to create a set you can go around Bristol collecting.

Here’s one from earlier this week…

That one didn’t last long, less than 24 hours.

So now there’s another. 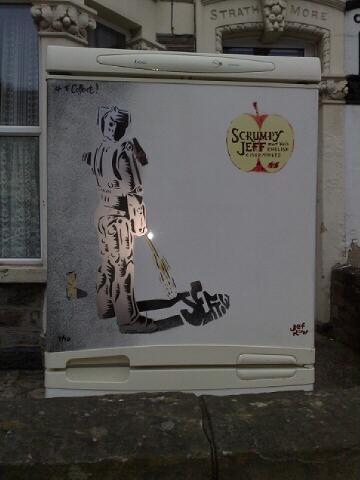 Keep an eye out round and about Bristol then to pick yourself up a free Jeffrow piece. Or a new fridge door with free artwork, depending on how you look at it.

Quick reminder that if you’re stuck for Christmas presents for anyone, then you could do worse than get down to the PRSC gallery at the end of Jamaica Street tonight, where bidding closes for the various pieces of work they’re auctioning off to raise funds for the project.

Apparently pieces are still pretty mixed in price, a couple of days back the most expensive was at £150, and the cheapest just £3, so worth a look. Bidding closes tonight ‘between 8:30pm and 10pm’, which is a pretty odd time for an auction close, but may as well get down there and see what’s going on, sure all will become clear!

Thanks to Logical1 for sending this one in, quite a nice stencil/painty piece up on Kensington Road in Redland. Twiggy, for those as remember back in the day (or watch the M&S adverts at the moment).

Nick Walker ‘Last Time In Chequers’.  Swear it went up the day Tony Blair stopped being prime minister, so 27th June 2007 according to Wiki.

Anyway, as of the last few days, now gone.

Shame in a way, as it had been being peeled off for a while now, and the peeling was revealing loads of layers of other spray paints by the look of it, possibly pieces from back in the day given what that cafe used to be.

Still, nothing ever lasts forever does it.