The new show at Guerilla Galleries opens tomorrow night (28th), but this blog, somewhat pleasingly, has been given a sneak preview of what’s going to be there on the opening to share with you all.

It’s all being put up at the moment, and the place is closed until the show opening, so excuse the way some of the pieces are ‘displayed’ here, but my is there some tasty stuff there.

Cheo’s got the wall Inkie had on the opening night, lovely pieces, signature stuff, and the bee on the dood on the right is raised up in 3D.

Some more of the little Cheo corner pieces. There’s a free, very limited edition, Cheo t-shirt with each of these little triangular pieces too, which looks lovely.

Monster’s a guy i don’t think i’d heard of before, not a Bristol head, but rather from Cambridge. Really like his stuff, this is the biggest piece there…

…and there’s tons more of it too, currently propped against the crates of beer people other than me are going to be enjoying tomorrow, dammit!

This is stuff by Simon Mills, who, according to his biog, loves scribbling, cider and a couple of other things i forget. Comedy biog though. Really like those black smudge heads,  although i’m caught in the trap of ‘i could do that myself/yeah, but i didn’t think of it did i?’ that you sometimes get.

These are really well done, by an artist called Hine, pieces with names like ‘los sucios santos’ and ‘balula’. Clearly a very talented guy.

Here are some bits by Rowdy, a departure from his normal style, but very lovely. The grey one at the back is really ace, but you’d need a nice enough flat or house to hang it in to do it proper justice.

Now getting into the stuff that you may recognise more. Here’s a newish Ghostboy print, check the side of ‘The Bell’ in Jamaica Street to see it in paint. The original was at the 12 days of xmas show too.

Apparently a Ghostboy original done for this show was sold yesterday to some guy peering through the window, seeing it and calling up about it. So literally as i type, Ghostboy’s putting the finishing touches to some new bits for tomorrow night, after a day battling to find canvasses.

Said it before and i’ll say it again, you’d have to have a cold, cold heart not to have love for Dicy’s skills. A hugely under-recognised legend of the Bristol scene. 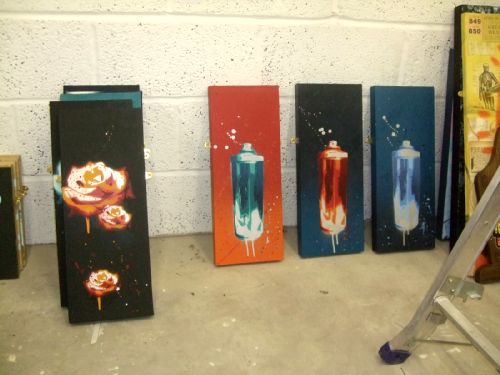 Imagine this will probably be sold by the time you get there, whenever that may be, an Andy Council original, framed, and looking awesome.

These aren’t going to hang around either, two Mr Jago pen and ink originals, very nice ones too. 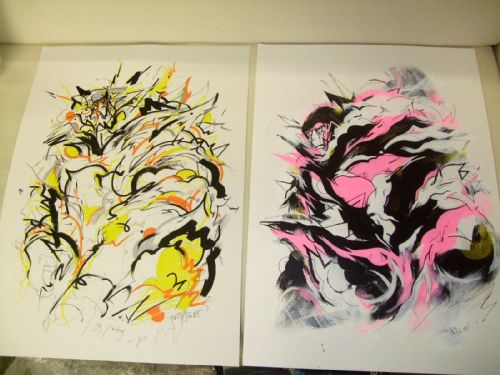 And finally more from that cheeky chappy of the What? Collective, 45RPM. Some big owls and a turtle… 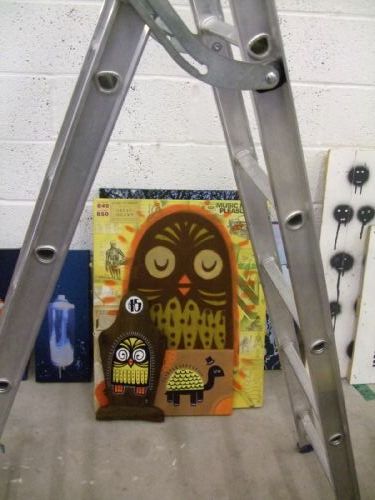 …and for those of you who missed out on them at the 12 days of xmas, a shed load more little owl canvasses.

Annoyingly, i’m probably not now going to be there for the opening due to a last minute, well, unexpectedness, but if someone reading this is going to be, and wants to write a review of it, then send it on in!

Enjoy it folks, this show is seriously good…

Wanna be on telly?

Well, sort of telly. Stuff with cameras anyway. Possibly to be available on the interwebs i should think.

Some uni students have been in touch who are doing a piece along the lines of ‘Has the Bristol graf scene changed since Banksy?’ which i think’s quite an interesting topic. Not one i’d really thought of before, so i guess my intuitive answer is no.

They’re looking to speak to artists and people who’ve been around the scene for a while, and they’re down in Bristol tomorrow (Thurs 28th Feb 2008) and Friday, and will be coming down again at some point in the not too distant future.

So, if you think you’re involved in this bristol painting malarky and have got something to say, then drop me a line (bristolgraffiti AT googlemail DOT com) and I’ll hook you up.

So having done Sydenham Road yesterday, here’s Sydenham Lane, a little lane running off and parallel to it. Sweet little lane in and of itself, with some cute pieces on it.

Recognise the style but no name to it other than ‘fd’. Works well with the overhanding tree though, adds to the furtiveness.

Interesting piece, reminds me of some of Sickboy’s stuff in an odd way, guessing it’s by Yaka.

This is sweet, and old too i think, remember others of these round this general area a good few years back now, 2000 or so. Moominpappa with his hat. 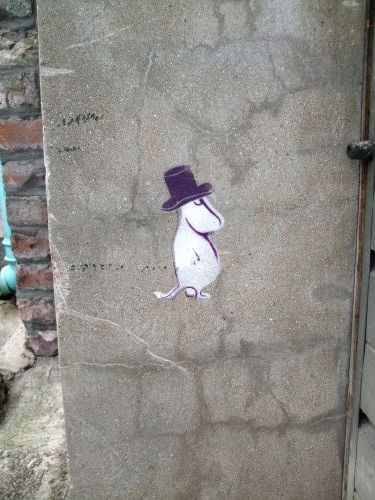 and another of the same hatted dood completes the other end of the lane. ‘Funky dunky’ seems to be what the ‘fd’ above stands for then…

Here’s Sydenham Road which runs off the lower end of Ninetree Hill / Stokes Croft, a road with some good stuff on it, some of it seemingly an extension of the PRSC work, other bits much older.

This is a really well known piece down at the Stokes Croft end, and could sort of be considered to be on Ninetree Hill in a way. It’s ‘in memory of Chris’, which i know nothing about, and the artists who did it is bugging me. Know who i want to say did it, but the names don’t quite match, so will hold fire on that for a mo. Feel free to confirm my suspicions in the comments though! 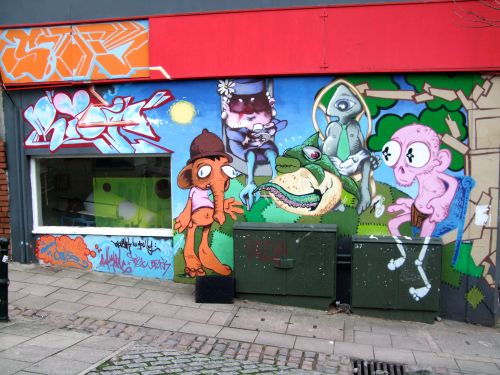 There’s a lot of Sepr on this road, here are some much improved garage doors.

Just along from that there’s a big old flower amongst tags.

There’s a set of hoardings covering some building work at the moment, ‘tagged’ as PRSC, and with a Sepr face at either end. Here’s the first.

…and here’s the middle of the boards, sadly pretty piled in building material now.

This i was most pleased to find though. There’s used to be a few of these around here years ago, 1998 might have been the earliest i saw one if memory serves. All gone now, so amazed to find this one still there. Not the best stencil ever, but stuck in my mind in those days for some reason.

Had spotted before that the Andipa Gallery has been busily buying all the Banksys they can get their hands on over the last few years, especially at auctions, and offering them for resale at a frightening markup.

Pleasingly though, it means there’s going to be a show in London starting in a few days time where 60 different pieces will be on show.

Shamelessly borrowed from the Guardian website, here are some pics of the more interesting bits that are going to be there.

This one’s listed as being called ‘Sharks’, but i swear it’s the one from the Severnshed show that was called ‘The painting that everyone says they want to buy but no-one ever does’. What a great title nowadays huh? 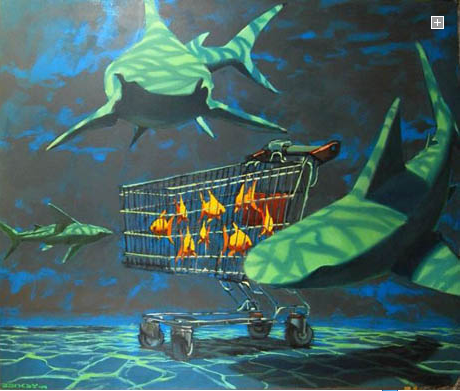 This is a pen and ink piece, ‘Underground terror tactics’.  Really nice, and interesting to see another angle on the tank with a speaker on top. Around 2000 or so a massive one of these, in more of a side view, used to be on Frogmore Street, under the now famous man hanging from the window. The mix of the tank with the sharks and barcode images is interesting too, lots of things that became different pieces placed together.

A CCTV camera on a ‘reclaimed’ roadsign. These are far and away the bits i used to enjoy the most, simple on colour stencils with a simple idea. 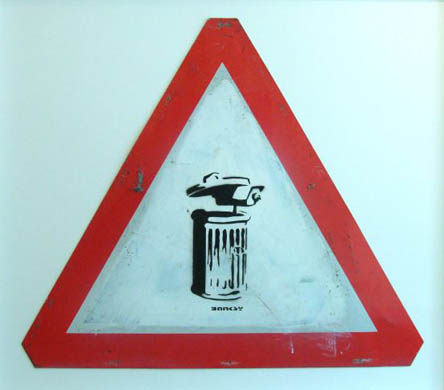 Sure there must be a good local journo style punning title for this post given the subject matter, but can’t think of one right now.

Anyway, the good Mr Sums has just sent me some snaps of a large paw piece he’s done recently. At least i thought it was recent, but having just been to check it out, think it must have been from back in the day a bit.

Anyway, really like these pieces, some of the best work around to my mind takes a simple idea and plays with it time and again (sickboy’s temples, banksy’s rats, cheba’s heads, jago’s alieny roboty things, etc)

So, here’s a splendid large paw down by Park Row.

Looking down on it from the trenchard street car park. 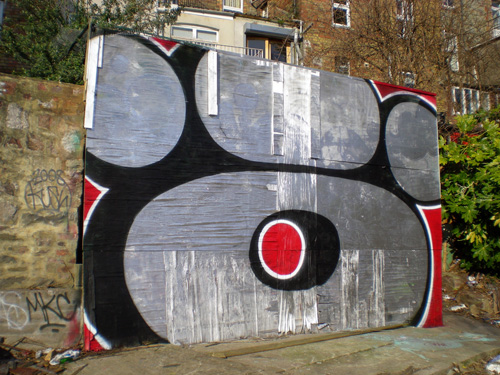 Saw this odd message sprayed on the steps towards the top of the Christmas Steps the other day, don’t remember spotting it before, but then I’m not often down that way anyway.

I didn’t get it when i first saw it, but whilst writing this blog i just have, and now regret even writing it.