Sure i must have spotted this before, must be yonks old, but this week i (re)noticed this old Ghostboy sticker on the advertising poster site as you queue for tickets at Temple Meads Station. Surprised it was still there…

Got myself over to Jamaica Street a few weeks back to record it (of which more later), and then yesterday found one of the biggest boards there, frequently recycled with images by the PRSC project, has now been covered with a big Tridios Bank advert.

Sponsorship for the project no doubt, and i can’t imagine anyone will be screaming ‘sell out’, as Tridios are generally seen as a good thing, rather than being corporate, a subject i wouldn’t want to comment on.

Seems an odder way of raising money though taking up a space previously used for art and converting it to advertising. Always thought with things as they are at the moment, they would have been better chopping out the art done on a semi regular basis, selling it, and putting up more.

A Stokes Croft wall over the years

A while back i was very kindly sent some old graf photos by Mr KRS, who has also been excellent enough to dig in his memory for places and dates for them. There’s loads of good stuff in there, but thought I would start with this one, as i remember it well and was sad when it was gone.

This is what it looks like today, hidden away behind cars, bins and general detritus, wouldn’t pay it a second glance really.

This is what it used to look like in the summer of 1997, a random message, but apparently may have been connected to the punk/hardcore band Nosebleed, who were connected to the Resistrance free party people.

After that one, appeared this. Remember it appearing, it was done one weekend in, I think, the late summer or Autumn of 2000. Mr KRS reckons it was there for a while, whilst it stuck in my mind as one that didn’t last too long before being painted out, presumably by the council, as the building it’s on currently has an unknown owner and the council’s trying to put a compulsory purchase order on it.

Never know how easy it is to clean off one layer of paint and leave others, but this one may just be worth it.

You’d think there would be more down here than there is, just around the corner from Cosies and all, but there’s not much at the moment. This little stencil amused me though. Such an obvious joke, but never actually seen anyone put it up anywhere before.

Hoping to put up some old school Banksy goodness during the week by the way, watch this space.

It’s odd, there’s actually been lots of graf round clifton over the years, but it tends to be limited to worked out pieces, especially stencils, so you don’t see much, but what you do see can be good. Clifton had a lot of Banksy’s in at one point, but most of them are gone now. A jaunt up Pembroke Road still brings you to one though, just.

It’s one of the old barcode stencils from around 99/00 i think, remember one appearing in Banksy’s usual spot on Jamaica Street around that time. It’s not a bad photo by the way, it really is that faded now.

Just along from it is this charming yet amusing image. Very postmodern. 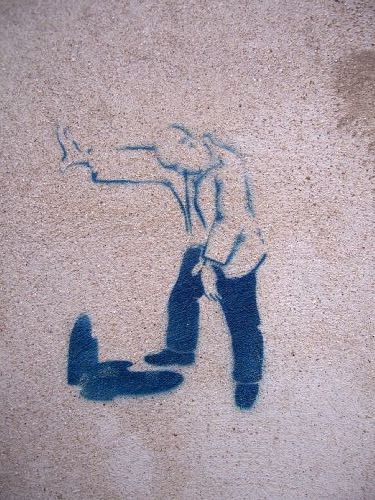 and you know what, you can walk all the way up Pembroke Road to the Downs and see hardly anything else. The only thing worth spotting, and even then tenuously, is this little red heart, stenciled on a gatepost.

As i mentioned in the post yesterday, the front of target electronics down the bottom of Stokes Croft was redone last night, and managed to get down there today to get a photo of it. Nothing immediately spectacular, but actually a real grower the more you look at it. Is it just me seeing a negative image of Stokes Croft there? 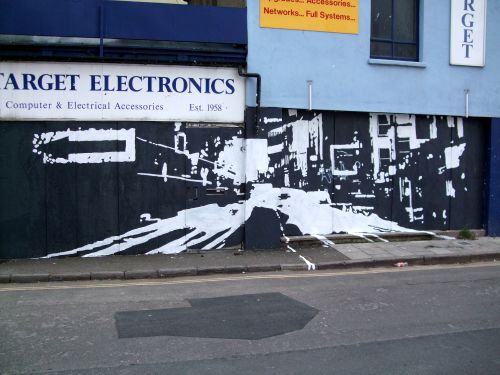 Back from the smoke

Was in London today meeting a few friends and acquaintances, some graf related, some not, but saw some stuff that I thought would be of interest.  Found out some other stuff that will be of interest to cover here later in the year, but here’s the present day for now.

Walked past the site of the covered over ‘Banksy Rivington Street Rat‘ and saw it for myself. Those boards really are huge. If they’re taking it, they’re taking the ‘Banksy TV being thrown out of the painted window‘ too. Who knows how you remove that much of a building safely.

Further down the street dropped into the Forster Gallery. Had heard rumours, but was gutted to see how the Xenz piece there, done on some huge boards next to the Gallery for his show, had been tagged over. I know this has been a debate on this blog and beyond recently,  but here’s an interesting example.

A large percentage of the people at the show’s opening night asked about buying these boards, to be told they were up for auction for a prostate cancer charity. A blind auction was very publically held for them and i understand ended with a five figure sum. The boards have since been largely tagged over, and the winning bidder is understandably a little concerned with his ‘prize’.  Very good people are now trying hard to sort this situation out, but there’s a reasonable chance to think that this tagging might just have cost a charity a large amount of money. Let’s hope the taggers never get prostate cancer hey?

The tag on the left says ‘smart crew’. I hear the original artist found this name ironic.

Another shot, Smart Crew tag behind the tree. 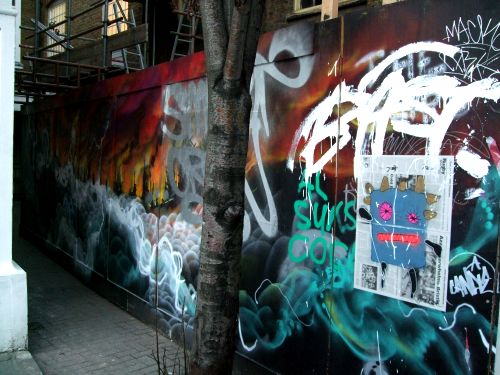 This piece was truly awesome, London burning. Now the St Stephen’s Tower part of it has been tagged too. 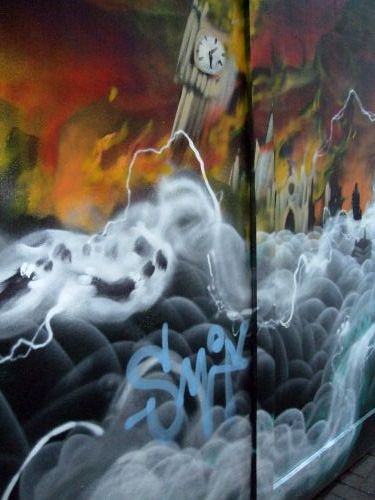 A smaller tag at the end of the piece. 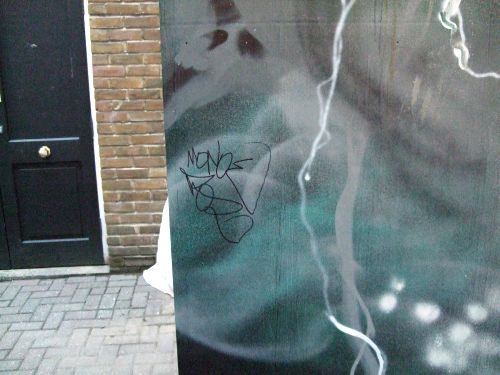 See, i think if a piece is about to get a prostate cancer charity a lot of money, destroying it through tagging is a bad thing to do. Prostate cancer is classless, so should this be.

On a happier note, i fleetingly saw the front of Target Electronics off Stokes Croft, that previously had a nice piece on it, getting redone earlier tonight. Will try and get down tomorrow to check it out.

Seems like a while since i’ve covered an entire street in a way. This constant rain isn’t helping in going out and getting more photos certainly, but got a fair backlog to share with you, so not worried yet…

Charles Street is another of those Bristol streets that probably used to be something far more than it now is, thanks to bombing, the council in the 1960’s and recent redevelopment. You’d miss it these days if you didn’t have reason to go down it, but if you’re down Stokes Croft or near the bus station, take a look.

At the bus station end of it, there are some boards with a fair bit of work on, part of the PRSC project i imagine.

A nice piece by Sepr, this dood’s pieces haven’t seemed to last too long generally, which is a shame.

No idea what this all is, but like it. 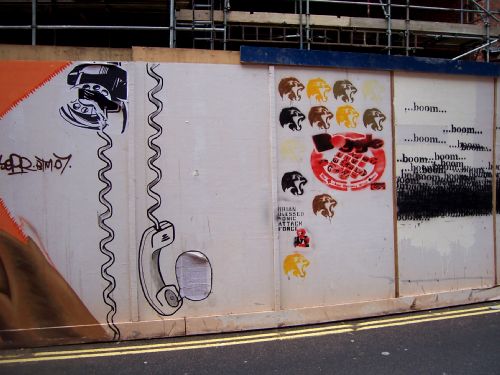 Close up on the above. If there’s a Brian Blessed Sonic Attack Force out there, then i want membership! 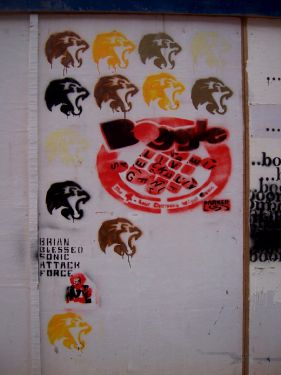 Take a simple idea, repeat it hundreds of times, and it works. Nice one.

Not graf, but it took me years to find, so thought would share it. Charles Wesley‘s old house, worth a wander round on open doors day i reckon, even if the rooms are surprisingly small.

Know i said I’m not a fan of tagging, but had to include this, as the Gink was probably the first writer i ever met, many many years ago. Asked him why he called himself it once, and he just said ‘Cos i’m the Gink dood’. Top bloke, not seen him for ages sadly.

Another Killer ghost. Something quite mournful about this one.

UPDATE: In fact, this is the photo that led to Killer and these ghosts wrongly getting tied up with each other. They’re not, in fact, by Killer.

At the other end of the street, on the side of the now shut King Charles pub (such a shame when an old pub closes down) was this massive chinese dragon in red. Only got painted over recently, and could have sworn i got a photo of it before it was, but can’t find it anywhere. 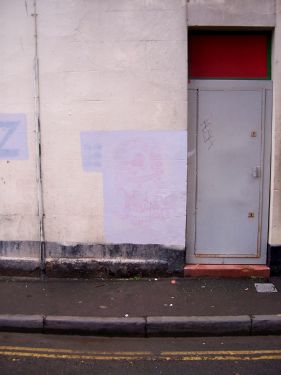 So for reference, here’s one in black that’s still there, up on Portland Street in Cotham.

Found these yesterday, very odd. Killer’s one of these strange writers who sit halfway between just tagging, and doing something interesting with thought behind it, this time with these mathematical statements. Anyone any ideas?

Up on Lodge Place 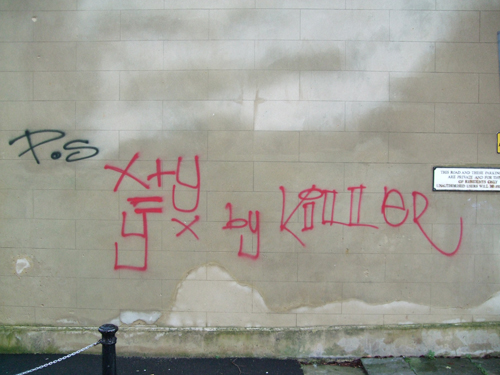 Down by the Academy on Trenchard Street

Next Weapons of Choice night

Following the success of the first event, there’s another Weapons of Choice night coming up at Mr Wolf’s on the 12th of Feb. This time the artists going head to head are Mr Jago and Inkie. Nurse, the screens! 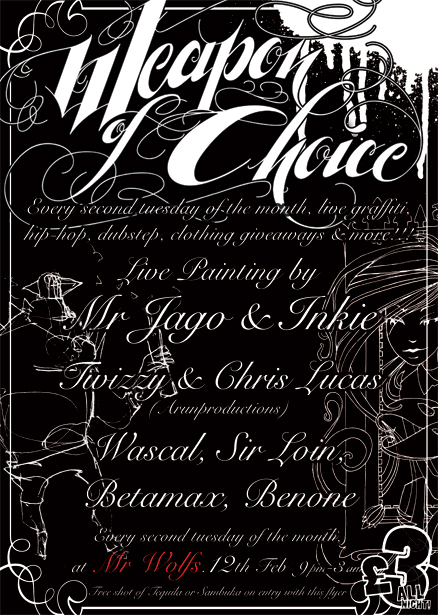