Battle Of The Boards – An Udpdate

Auntie Beeb’s picked up the story here, with a clarification from Cllr Gary Hopkins on what the council policy is going to be. Sounds promising!

Get Dring Mobile – The Auction

You may have heard of this by now, but if not you should do. There’s a charity fundraising drive going on at the moment called ‘Get Dring Mobile’, which is aiming to raise enough money to sort the legendary Mike Dring of Art-el fame out with a a modified vehicle he can drive himself. For those as don’t know, here’s the backstory from the fundraising website;

Michael Dring was 23 years old when he broke his neck in a road traffic accident, resulting in paralysis from the upper chest down – medically he is classified as having a complete Spinal Cord Injury (SCI) resulting in Tetraplegia (level C6).   Between April 2009 and April 2010, friends and family of Michael are attempting to raise money to put towards the purchase of an adapted car which will enable him to drive independently.

Being the kind of bloke he is, this isn’t just about Mike either;

Any additional funds raised over and above the amount needed will be either donated to Salisbury Spinal Unit or go towards a lasting legacy of this project.  Michael has been so inspired by this initiative that currently he is exploring the possibility of setting up an official charity in order to help other people regain any loss of independence due to SCI.  If Michael succeeds in setting up this charity any additional funds will go towards this charity which will assist others to afford hand controls or vehicle adaptations.

So, lots of stuff going on as a fundraiser, but one element of it, natch, is raising funds through grafurbanstreet art. A call was put out for people to donate pieces to a fundraising auction which has had a huge response, so they’re now going to be holding the thing down at Paintworks, viewing of the pieces on the 14th and 15th of October 2009, with the auction starting at 7pm on the 15th. Get down there early on the 15th though, as there’s going to be music and live painting from 4pm, with Inkie and Mr Jago just some of the names confirmed so far.

If you’ve got a piece you’d like to donate to the auction then there’s still plenty of time. The line up’s pretty special already.

There’s loads of other fundraising stuff going on too, and this bit should be a great event for an extremely worthy cause. The only thing to work out now is how to stop Mike bidding on the pieces himself.

For those of you not wanting to get into another debate on the council buffing pieces, there’s an interesting discussion over here on Flickr at the moment about commercial companies using people’s work on walls for photoshoots.

In essence, what looks like an ad agency was down Dean Lane the other day, doing a photoshoot in front of a 3Dom piece (a legal one, given it’s Dean Lane). 3Dom probably won’t get credited in the final ad photos, but in essence provided the backdrop for it. Is this right, or if you paint something in public should you just expect it to get used by anyone with access to that site?Are there any artists in particular out there with a view on it?

Keep the debate over at Flickr if you would (unless you’re not signed up there), but in the meantime we’ll do some digging and see what the setup for these things might be.

UPDATE: Well, that was easy. The organisation that looks after people doing commercial filming and photography in Bristol is Film Bristol. It’s part of the council, so if you want to film or photograph on council owned property for commercial purposes, then you need to speak to them to buy a permit. It’s not immediately clear what the enforcement is for not getting a permit.

More interesting, their website has a database of locations for filming and photography, which include graffiti as one of the assets for various locations, including round the end of Ashley Road over to Herbert’s Bakery/Star and Garter, the M32 Junction, Dean Lane Skate Park and other places. The photos on the site are all copyright, but you can register and have a look yourself easily enough here.

So, could be wrong, but it looks like the situation is that if you paint in council approved locations, then the council implicitly has the right to license out your work for filming and photography.

Battle Of The Boards – The Saga Continues

Remember these boards? Painted by Cheo and 3Dom, then painted out by the council without the owner’s permission, for which the chief exec apologised.

Well, they’ve been pretty much unpainted for a bit, but at the weekend Sepr went back to paint them, starting on Saturday, but not being able to go back and finish them on Sunday due to the rain. Seemingly the only photo of the work as far as it got up to is courtesy of Unity on Flickr (click for bigger). 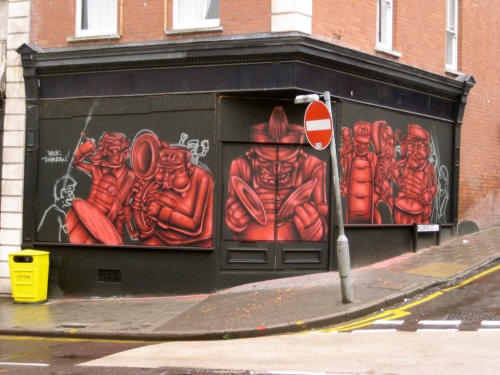 They looked like that this (Monday) morning too, but by this evening, they’d been blacked out by council workers again. Someone’s already been past and added their own contribution to the debate by the looks of things though. 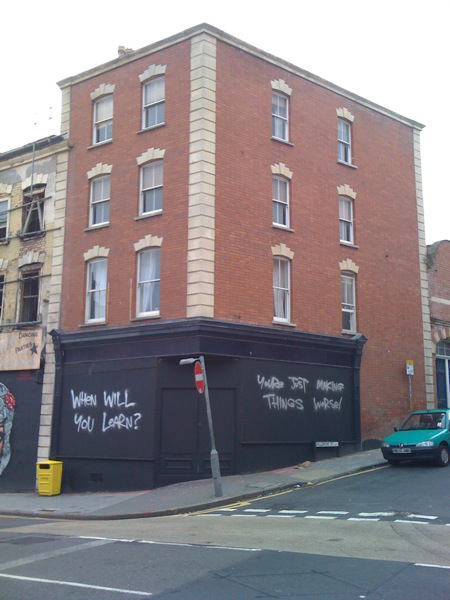 Close up on the left…

So, painted out in less than a day then. Let’s not forget that whilst the building may apparently be Grade II listed, the boards on which the painting is actually being done seem very unlikely to be. Leaving the boards painted black when the rest of Stokes Croft is covered in murals just looks ridiculous as well, hardly an improvement to the area.

Sure the PRSC will have some comment on this very soon.

Seems like ages ago now, but thanks to Jon Davey for sending in a link to an interactive panoramic shot he did of the RWA show, really brings the thing to life somehow in a way standard photos don’t.

There’s a good one of Turoe painting down at Dean Lane as well if you fancy it. Some of the angles on Turoe can get a bit freaky though…

Paris is all over the place at the moment, there are more out there to photograph still, but this is a new piece (just under a week old) on the wall at the back of the Friend and Co Gallery. Turning into quite a painting spot that wall, repainted fairly often. 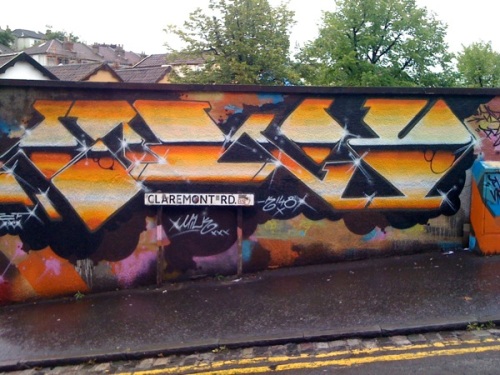 Quick plug here for the latest thing going on from the PRSC. Opening this Friday, they’ve running a rolling gallery show that anyone is free to enter work into, and of course anyone is free to buy, with the money being split 50/50 between the artist and PRSC. Given the council seems to be getting more interested in their vision for Stokes Croft at the moment, it’d be handy for someone else to have some funds to represent people with.

So, get down there with work if you’ve got anything spare at the moment, and go along to the opening night this Friday (24th) as well.

Here’s the chat from their blog…

The Selling Gallery will open its doors on Friday 24th July at PRSC HQ.

This will be a rolling exhibition that will run all summer, showcasing and selling the work of local artists, thus generating income for local artists, and for PRSC to continue its work.

Anybody may submit a piece of work. subject to there being enough available space, the work will go onto the wall of the gallery for two weeks, and will be sold by Dutch Auction

How it works: Bring in a piece of work. Tell us how much you would like for it in a perfect World. This will be the start price… Set a reserve price… (No more than £50).

For the 14 day period, the price will descend from the starting price until it reaches the reserve price two weeks later. In the event of the work being sold, the proceeds will be split 50/50 between artist and gallery… If unsold, it will return to the artist…

Buyers will have to work out whether they are prepared to let the price descend, and risk the work being bought by somebody else…

As soon as a work is sold, it will be removed from the wall and another work will replace it… Thus will a rolling exhibition be created…

In order for this to work, we will need you to bring in work… If you have  something, then please e-mail dutchauction@prsc.org.uk to organise delivery of the work…

Bristol graffiti
Create a free website or blog at WordPress.com.