Can’t be an improvement in the weather, so perhaps people have just got bored of waiting. Anyway, lots of painting going on around Stokes Croft over the weekend, including this one from Silent Hobo, over what Petro did a while back. 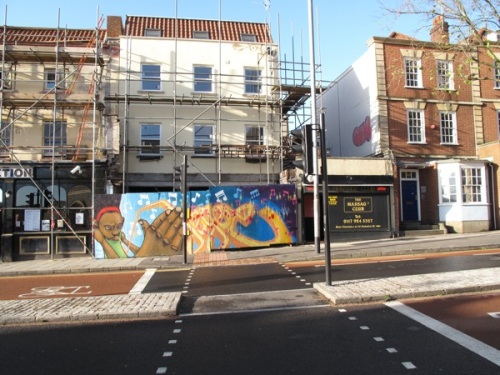 It’s been up for a couple of weeks or so this, Silent Hobo providing a counterpoint to Paris’s work up on Target Electronics at the bottom of Stokes Croft at the moment. 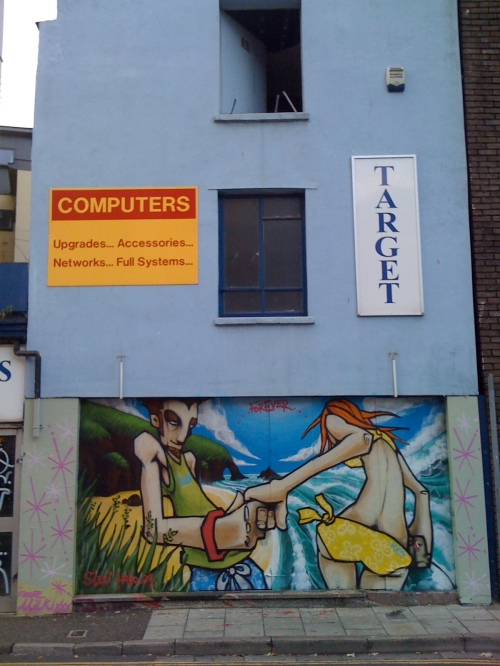 Seems like ages ago now, but thanks to Jon Davey for sending in a link to an interactive panoramic shot he did of the RWA show, really brings the thing to life somehow in a way standard photos don’t.

There’s a good one of Turoe painting down at Dean Lane as well if you fancy it. Some of the angles on Turoe can get a bit freaky though…

So, different part of the site, down by the Bimble Inn, and different artists too, but turned out nice again, in all senses.

First of all, just Silent Hobo and Tarqs getting their paint on in the sun. 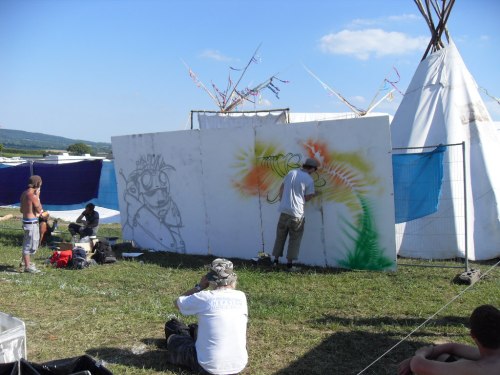 Silent Hobo with a character piece…

…and Tarqs with something more abstract.

Bit later on, but the character came together pretty quickly to be fair. 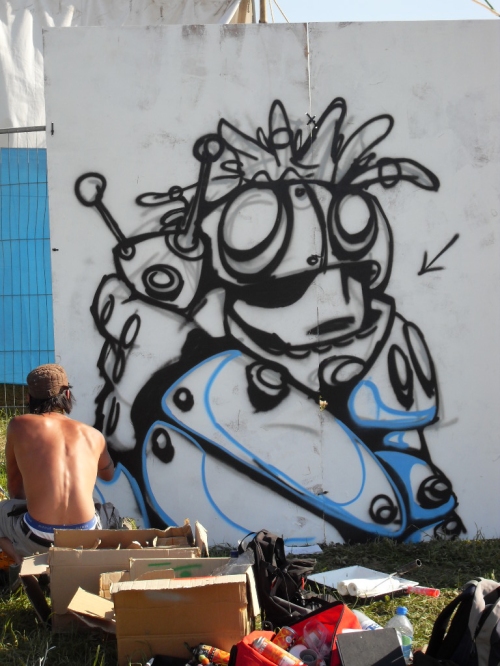 As you can tell from the shadows, a fair bit later on, drew quite a crowd.

Really late in the day, Magic turned up as well, having headed cross country after a last minute invite.

Really painted fast, but it all worked out well. Impressive seeing something like this done at top speed when the light’s fading.

And that seem to be pretty much it for the light that evening, plan was to go back and get a finished photo in the morning, but sadly wasn’t to be…

…overnight high winds had brought the whole board and fence antics crashing down, even snapping some of the blocks the fence was placed into, meaning the boards had to come off the fence.

So, for the rest of the festival, this is how these ones ended up. Real shame, but interestingly, there were still people admiring them, taking photos and generally not walking on them at all the whole time. 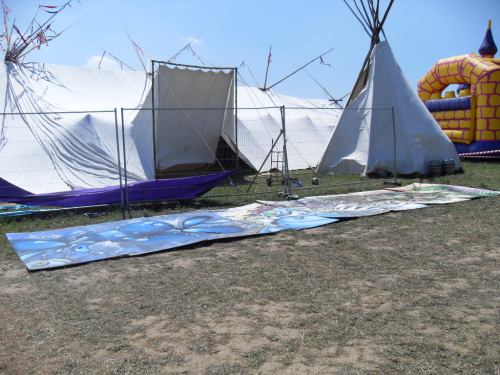 Sunrise Celebration Gets A Paint Job

Fun festival Sunrise Celebration, bit hippyish, but a top vibe with tons of friendly folk. The lineup and programme seem to go out of the window at the start, but amongst the arrangements a bunch of Bristol artists had been talked into the difficult task of painting in the glorious countryside on a sunny weekend with good music and cider.

Three different sets of painting went on over the weekend, well, sort of four, but here’s the first. Sepr, Epok, Tarqs and Silent Hobo painting up by the Chai Wallahs tent.

One of those festivals where it’s all a bit DIY, so first things first, get the boards painted and attached to a fence.

Baking hot afternoon, Sepr’s up first to mark out a character.

As the shadows begin to draw longer, Epok’s been in and got his piece done too.

Looked great in the evening sunshine, even if the boards went a bit warpy in the heat. 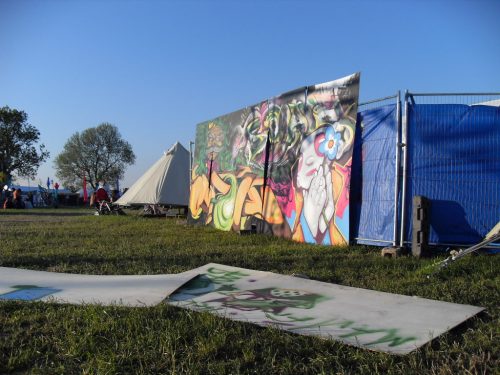 Bit closer on the finished thing.

The show’s preview night is tonight then, and it opens properly tomorrow (Saturday) so the photos can go up. Got to say, unless you absolutely can’t make it down to this, don’t rely on the photos for it, they’re never going to capture the whole thing properly.

Anyway, photos of the finished works in there, again in no particular order, courtesy of WordPress.

RWA Show – The Run Up

So, three weeks and a silly amount of photos later, here’s some shots that show some of how the whole RWA show came together. Not even going to attempt to put them in anything other than a gallery, but have put notes on them about what they are. WordPress is freestyling the order it puts them in too, but they’re all dated.

It was a blast watching it all happen, hope the photos are as fun to look at as they were to take.